I’m reading Flame of Recca. It’s strangely addictive! Though the art, writing, and gender issues are all unbelievably terrible.

I think the Avatar guys must have read it, because villain #1, Kurei, is (minor spoilers for both)

END_OF_DOCUMENT_TOKEN_TO_BE_REPLACED

Please enjoy these demonstrative images relating to the Avatar casting, via 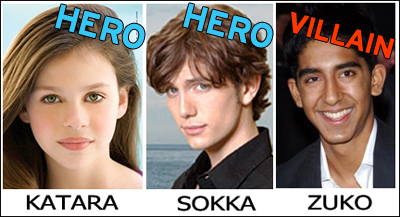 This is the most hilarious thing ever if it’s for real.

Also, I can’t play WoW right now because the zombies keep killing me. And then, when I turn into a zombie, the guards kill me. I do appreciate the scale of the event, but it would’ve been nice if they’d put in some content for lower-level players.

(The one time I got away from the guards in Orgrimmar, I went and retched all over the orphans. Turns out orphans are immune to zombiedom. Oh, come on.)

It probably doesn’t count as liveblogging if 1) I’m watching it several days after it aired because I haven’t had time yet, and 2) I’m not actually blogging live because I wanted to sit on the bed, and so had to unplug the ethernet cable.

END_OF_DOCUMENT_TOKEN_TO_BE_REPLACED

Avatar isn’t going up on iTunes as it airs! What’s the point of these “season pass” things if I just end up on BitTorrent anyway?!

I am going to drop dead if I don’t get more episodes of Avatar right now.

(Nickelodeon has not generally been one of the companies it occurs to me to despise – I mean, it’s no Eli Lilly, or Sony. But now, knowing nothing more about its business practices than It Has Episodes Of Avatar That I Don’t, I am adding it to the list.)

END_OF_DOCUMENT_TOKEN_TO_BE_REPLACED

Man, Zuko. Will you cut that shit out.

I like how, though I originally had something specific in mind for that statement, it could be referring to absolutely anything.

“Now comes the part where I double-cross you.”

1) I love Toph so much. But she needs to beat up more actual living things soon. As opposed to like buildings and stuff.

3) Zuko’s voice actor is okay with Wounded And Vulnerable, but not so much with the Angry And Wants To Kill You. And he’s angry a lot! It’s distracting. And I still feel like Aang and Katara’s voice actors are kind of stiff a lot of the time, particularly when they’re delivering plot-loaded dialog. (Yeah, I know, they’re pretty much kids. But Wikipedia says Toph’s is thirteen, and she mostly doesn’t throw me off.)

3a) I think I don’t usually notice it when anime voice acting is bad. Also, I watch so little TV, particularly English-language TV, that watching this is actually kind of strenuous. No, I seriously have to lie down for a while and rest my brain by thinking about manga or CSS or something between episodes. Following a TV narrative in English is a form of mental exertion to which I am unaccustomed.

4) I think someone’s icon spoiled me about a character death. But it’s a character I want dead. So I seem to be okay with the whole thing.