I have been doing so many kanji flashcards they have taken over certain other vital neural processes, including quantifying time and the sensations of pain and heat. I think I had a dream about flashcards. I have the idea in my head of the master kanji, with a stroke order requiring nine simultaneous strokes, properly writable only by the thousand-armed Kannon. The last attempt to write it was a five-person effort conducted in Sapporo in 1916. Four died, and the fifth, responsible for only one stroke, went mad.

We went to Nashville over the weekend, and I bought some substandard Houjicha for much more than I should have spent. I was unaware that there was a 1:1 model of the Parthenon in Nashville! There were a lot of reproductions of statues of naked men there, of the variety that had apparently at some point been partially genitally modified by the Roman Catholic Church. By this I mean that the phalli had been removed, but mostly not the testicles. There were also newer statues created for the reproduction by some late-1800s American artists, which reproduced the effect of the Catholic Church’s efforts. So I guess there is a whole Vandalized Art tradition in which these people were working, in which it is necessary to treat the vandalization itself as a valid part of the art? I guess.

I’m positive that it is some sort of sin that I was standing around the tourist trap holding my camera and squinting at small plaster crotches and thinking these thoughts. It can’t be a new sin.

2) Regardless of your answer, have you spent any time around Japanese guys?

Yes! I’m assuming it was the detergent. The hidden part of this post uses the word “suppositories,” and is precisely as unpleasant as that word’s presence would imply.

END_OF_DOCUMENT_TOKEN_TO_BE_REPLACED

Successfully acquired rice cooker off Craigslist for 1000 yen. (Not from the guy before, from another guy.) The rice is soaking, and shortly I shall test it.

Went to Koishikawa Kourakuen. In January, during my assault on Tokyo’s Important Landscape Gardens, I went to Rikugien, Kyu-Shiba-Rikyu, Hama-Rikyu, and Kyu-Yasuda. I thought Rikugien was the prettiest of those. But Koishikawa Kourakuen? Has magical powers. I will post pictures later – I killed my phone’s battery taking too many (which was almost a problem because I was meeting the guy with the rice-cooker after). I’m beginning to regret my failure to replace my old Canon camera. My cell camera is not up to such things.

Every single person on the train who had a DS was playing Dragon Quest IX. McDonalds here have a WiFi connection for DS use, and if you go in one, you will invariably see a bunch of middle-aged guys sitting around with a small drink and their DS out, playing Dragon Quest. Some of them will have white DSi’s they’ve put decals of the Apple logo on.

From what I understand, the game’s aim is to be WoW for the DS. I can’t be allowed to have it; the combination of short quest-based gameplay and Toriyama art would cause me to cease to be. I’ve been engaging in douch-y power-leveling in Disgaea instead. (Though I kind of feel as if I should dig out my Pokemon Pearl game and beat it already. To get into the spirit of things for the Arceus movie! You know!)

At the grocery, I saw a woman letting her daughter, who was too big for it, sit in a stroller-cart. They were both giggling madly. The mother said, “Beebi-mitai na [something] ne!” The meaning of this is roughly, “Aw, you’re just like a baby!” But this is how I know I’m not fluent in Japanese – I heard all of the sentence but the [something], and I know pretty much what it means, but I can’t figure out what the “[something]” should have been. My brain cannot extrapolate.

(The girl looked a lot like Mr. K and Princess, which made me kinda sad. Mr. K’s class should have started about fifteen minutes ago… I hope he’s being good.)

Yes, I could have bought it off Amazon.co.jp, but where’s the challenge in that? Anyway, I now own volumes 1-4.

I also bought my back-to-Japan plane ticket yesterday. Procrastination is magic – the price had dropped $150 since last time I checked, and there was a flight with only one connection. It’s Northwest again, though. I hear if you collect enough We’re Sorry We Suck vouchers from Northwest, they give you one of those little carts they use on the tarmac!

There’s a mangaka called MATO I like, because she did the art for the weirdly-dark but still-insanely-cute Pokemon comic Pokemon Adventures and shut up I hate you all. And a while ago I was looking blankly at the doujinshi section in Book-Off, and somehow – despite the fact that I still haven’t memorized the kanji for Okano Reiko, despite the fact that I’ve expended a lot more energy on her – recognized MATO’s name on one of the spines.

This was a Gundam Wing doujinshi called “Kaze no Yukue”/”Where The Wind Is”. I’ve also been very slowly watching Gundam Wing recently. So I can affirm that, in context, this doujinshi is extremely hilarious. There are slight Quatre-related spoilers under the cut.

END_OF_DOCUMENT_TOKEN_TO_BE_REPLACED

For the last few months, when I type a new kanji into the RTF files I’m doing my translation projects in, 90% of the time it comes out pointing left. My kanji do not know which way is up.

I thought at first that the problem was only with @SimSun, which is apparently intended mostly for Chinese, not Japanese, but switching to MS PGothic, which actually has “Japanese” as a language option, doesn’t fix it. Anyway, they both used to work. And I’ve saved and restarted and reopened trying to right them, but nothing changes. This isn’t disabling, since I’m lazy and I either romanize or kana-ize everything before I start the actual translation (the kana work properly), but it’s really irritating.

Since I haven’t installed any new Japan\China\Korea\etc.-related software or fonts during this time, I’m going to assume this is something one of the Windows updates did. 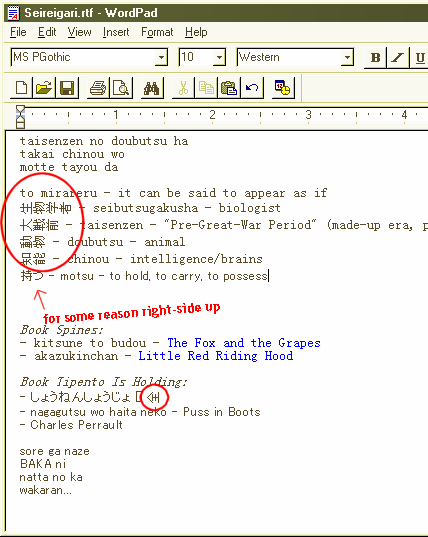 (Edit: And if anyone reading this can tell me what the spine of the book in this image says, and what that title would probably be in English, I would be extremely happy. From the context it’s obviously a children’s book involving talking animals, and Charles Perrault’s name is on the cover, and there’s the phrase “boy(s) and girl(s)” in there.

Edit again: Okay, yeah, the book is “Puss in Boots,” so the spine is probably a series name. (This is important, okay?!)

Either one of my so-called “friends” got into my translation project – or I got very, very, very tired at some point.

In a place where there ought to be complicated kanji technobabble, I find instead katakana, saying “baka na!”

I actually really don’t think I would have done that. I’m thinking Jenan.

Doesn’t even make sense in the context of the paragraph, I’m disappointed in her.

I finished Torikaebaya Monogatari/The Changelings/If Only I Could Exchange Them a while back. This is a book written during the Heian era about a brother and sister who are “by nature inclined to act as the opposite sex,” and just happen to look exactly alike.

Guess what they do.

They eventually switch back, after several years, a lot of angst, and no actual, physical gay sex.

The author is unknown, and there’s apparently a debate about his/her gender. I will now conclusively put an end to this debate through the application of my giant brain:

The author was a straight guy because the thwarted-buttsex was comedy and the lesbian stuff was completely serious.

You may now sit in silent awe of my brilliant and I’m sure completely original analysis. Tears may, if necessary, spring to your eyes; no sniffling.

END_OF_DOCUMENT_TOKEN_TO_BE_REPLACED 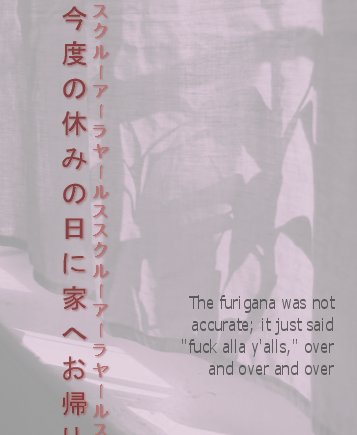 I was erasing a lot of the furigana I wrote on my Japanese homework yesterday, so as to force myself to actually memorize stuff, and I realized I’d written down the hiragana for *the number four*. This irritated me seriously, to the point that I considered writing a rude note to myself there.

At that point it occurred to me that if you were a Japanese asshole, you could put furigana on really easy kanji that just insulted people for not knowing them.

Incidentally, the furigana does not *actually* say “fuck alla y’alls” – it says “screw alla y’alls.” This is because I changed my mind halfway through, and Paint Shop Pro *for some reason won’t let me insert Japanese text* christ what the hell, so I had to take screenshots of Wordpad and then do all this retouching to make the text look right against the darker background and screw fuck it I wasn’t going through that *twice*.

This is not, in fact, how one writes the kanji for “chikai”:

So I kind of *completely forgot there was a quiz today*, okay?

I don’t recall this working out too well in high school history, either, so I’m not sure why I felt I had to go and *reprise* the whole *debacle*. I guess it just sort of *occurred* to me that, like, *maybe* drawing a hat and a pie – in lieu of, you know, something distantly resembling a serious answer – might be in some way *more acceptable* in a college Japanese class than in high school American history. Can you even tell that that’s a pie? I think it looks like a burger. I should have at least drawn a *better* pie, if I’m going to be drawing pies on my work at all. I mean, Christ.

There was also an Asian Civ test today. (which is why I forgot about the quiz and ended up drawing @$%#%-ING PIES on it…) While studying this morning, I came across the below passage in my notes – poor chronology and random capitalization and punctuation left intact for your consideration:

* Maybe Nyx wouldn’t suck so bad if I layered it with Black Pearl. Does Nyx have Rathrani? Something has rathrani…

The type of student that I am is what is known in the clinical terms as a “terrible, terrible student.”