At home. Politics is infuriating and sleazy and I will do the revolution just so as not to subject people to stuff like what happened today. My revolution will be the first to use a video game for its core text, that being Kingdom of Loathing, which teaches that you fight sleaze with ice and spookiness – but watch out, ‘cuz it does double damage on fire and stinkiness!

I will have there be some kind of jerk blood-test that they administer before they allow you to run for office, or maybe one of those questionnaires that’s supposed to identify sociopaths. It will save the non-loathsome candidates money, and the public a lot of unattractive advertising.

I went to take a nap immediately after

thegeekgene and I got home, morosely convinced that she would wake me up in under an hour so I could deal with a crisis involving sleaze having followed us home and being on the porch with a fake special knife from a seventies movie from out of the Edge Co. catalog.

Mom woke me up an hour ago and fed me some very good pork, though, so I feel better now.

END_OF_DOCUMENT_TOKEN_TO_BE_REPLACED

Martha Wells is posting her book The Element of Fire on her LiveJournal, and that means you must read it, your only excuse for not having previously done so being its Impossible-To-Find status. (link via

Cardcaptor Sakura probably fosters really unhealthy attitudes about honesty. There are all these scenes, particularly in the last couple volumes, of which the moral is basically, It’s okay to deceive your loved ones if you feel like it’s for their own good. Particularly if the loved one is Sakura. She will totally thank you for it – tears in her eyes, screentone with bubbles and flowers, the works.

Facetiousness continues, but with slight spoilers:

END_OF_DOCUMENT_TOKEN_TO_BE_REPLACED

And [person] (at least I think that was her, I’m bad with names) left a sword with a cat (?) puppet on top of it outside your door. Just to tell you, if you were wondering. I don’t think anyone would have taken it but…oh well. 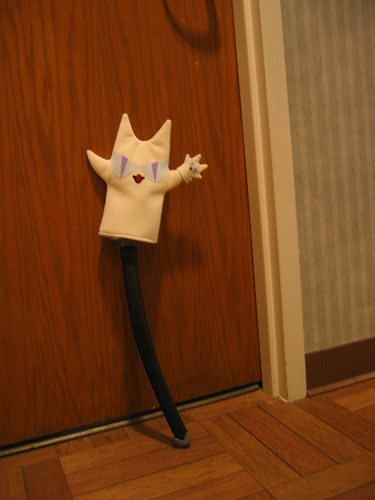 I guess the internet’s been having Big Creepy Bugs Week or something? There seem to be more people than usual having horrible bug encounters on my friends list, and there was a thing on one of the _wank comms about people wanting bug pictures kept under lj-cuts.

In middle school I would always carry a thing of dental floss in my bag, which I would use to make little leashes for the preying mantises I beat out of the bushes at recess. That sentence should be giving you a pretty accurate picture of my social life at the time.

But it also means that I can totally look at those centipede pictures on FW and then go right back to my crunchy sandwich.

Today, however, I looked at Boing Boing. And there was the fucking hummingbird hawkmoth.

I seriously don’t think you should click on that link. (You probably shouldn’t read the rest of this, either.)

END_OF_DOCUMENT_TOKEN_TO_BE_REPLACED

elongated_tito just made me watch Sin City. I know it’s kind of, like, done to complain about the movie’s treatment of women, but. Yeah, okay.

Eleven-year-old girl that Bruce Willis has just rescued from bad guys tells him, “I’m still a virgin, thanks to you.”

END_OF_DOCUMENT_TOKEN_TO_BE_REPLACED

Sechs is my favorite transsexual clone android sociopath who’s not that smart ever. 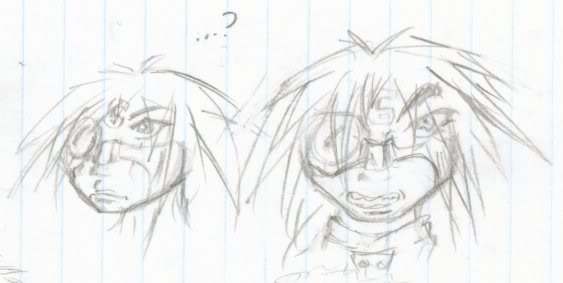 I was trying to figure out the difference between the shape of Alita’s head and the shape of Sechs’s, basically, but Alita came out wonky, so I’m putting the rest of the page behind the cut.

END_OF_DOCUMENT_TOKEN_TO_BE_REPLACED

MINDBLOWING picture of some kind of noodle thing:

END_OF_DOCUMENT_TOKEN_TO_BE_REPLACED 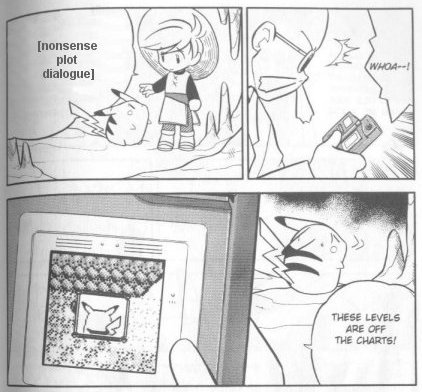 I need those guys from Ghost in the Shell who kill crows with really big fire extinguishers, or whatever it is they were doing. The cheery robins need to be taught a lesson. A lesson in CYBORG FANSERVICE. I mean. In PAIN.

Because KoL is not enough of a time sink to satisfy my lord Sal, God of Increasingly Absurd Finals Week Procrastination, a couple of days ago I started messing around with two other browser-based MMO’s. The difference between these games and KoL is that these games are bad. Today I’m going to review them because I’m grumpy and require an absurd, helpless target to abuse.

Summary – BiteFight is a badly-designed game with a mysterious gardening fetish.

END_OF_DOCUMENT_TOKEN_TO_BE_REPLACED

Cut for offensive banner ad. Because I don’t put *ads* right out on my front page unless you’re *paying* me. It’s a *principle*.

END_OF_DOCUMENT_TOKEN_TO_BE_REPLACED 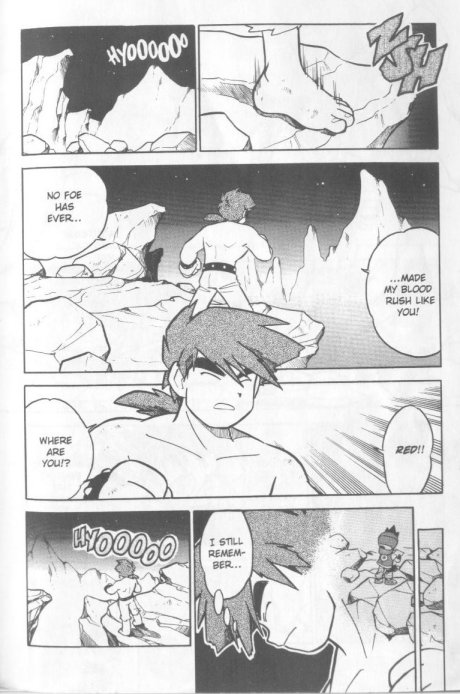 I feel like it’s my patriotic duty to review The Hidden Stars by Madeline Howard/Top-Secretly Teresa Edgerton in such a way that you will want to go buy it. But every time I try to start, I end up with some variation on this sentence:

So there’s a problem.

(‘All giant serpents will be fitted with sports goggles to prevent eye injuries.’)

END_OF_DOCUMENT_TOKEN_TO_BE_REPLACED

While I was eating dinner, the school’s secret society (membership about five, apparently) ran in and knocked down a bunch of stuff. Being hardcore, they were all wearing nice custom-made white hoodies decorated with their attractive logo, plus the white masks. They have a KKK theme going on, but the hoods weren’t pointy, that being too last season. Though, as advertised, they *were* all husky white guys.

I wasn’t looking up when they came in, and was sitting pretty much off in the corner, but the sequence of events seemed to be,

END_OF_DOCUMENT_TOKEN_TO_BE_REPLACED

They never use my brilliant fucking ideas.

So, I am Important Technical Person for a campus publication.

And the dining halls keep putting these absurd standees on the tables, and everyone mocks them and draws graffiti on them and so on.

So, I started making these… 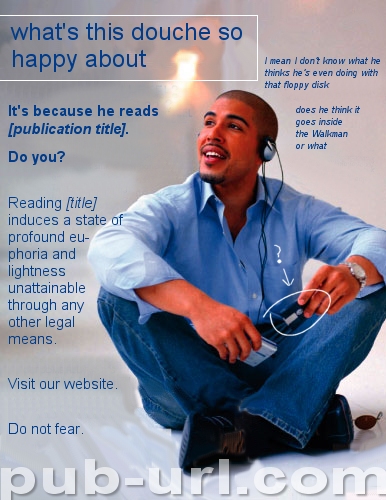 I made several. It was hard. I think I hurt my mouse hand a little.

They were deemed *inappropriate to our image*.

*gets up and leaves room without warning; unnerving sounds are heard; returns*

So you can have it, internet.

What’s the deal with your name, Zorndyke? Zorndyyyyyyyyke!

So I was thinking that I’m not really sure I can describe how xenophobic and morally irresponsible Blue Submarine No. 6 is without sounding like zee hysteric who will take zee dumb action anime *way too seriously*.

But then I realized that hey!, I pretty much am. So.

END_OF_DOCUMENT_TOKEN_TO_BE_REPLACED

Now that I actually think about it, I do feel safer knowing that Cheney can’t handle a gun.

I am, after all, not his friend.

I got ten DSH samples, the one I’ve got on now, “Silk Road,” is the ninth I’ve tried, and it’s the first one I’ve really liked just on its own. Bois du Chocolat works *really* well layered with BPAL’s Black Pearl, as I have previously indicated, but by itself it’s just incredibly harsh. Straight Bois du Chocolat’s tagline could be “Doing lines of cocoa powder as if you believed it was cocaine apparently, and it *hurts* – The Experience.” That would make a poor tagline, I think you will agree.

Anyway. Silk Road. Not shockingly, it’s mainly a tea scent, but it’s got lemon, bergamot, rose, and beeswax in it (I looked at the ingredients list – I think you can tell the bergamot pretty easily without it, though), so it’s a sweet one – it doesn’t just smell like Earl Grey, which I was kind of expecting and would have been okay with. And it isn’t all dry, either. I feel like with some of the other samples I didn’t like that the woman had one particular ingredient in each that she was really into, and she overdid that one so things came out kind of unbalanced, but this seems pretty well-balanced to me – the tea is kind of muting the other stuff now that it’s drying out, but not overpowering it.

I’ll talk about the others behind a cut, because I know you’re all just fucking philistines anyway. (Should I capitalize “philistine?” I’m not going to. I’m not totally sure what ethnic group we’re even talking about there.)

END_OF_DOCUMENT_TOKEN_TO_BE_REPLACED

We are in Nashville. I have been buying books.

END_OF_DOCUMENT_TOKEN_TO_BE_REPLACED

Books that are awesome recently: the Steerswoman series. Rowan and I are getting married, and neither you nor heterosexuality nor any other force of nature have any say in this, Rosemary Kirstein.

Books that aren’t: An Excellent Mystery, the eight kajillionth or whatever book in the Brother Cadfael series. This book has Sexual Politics, which I’ll talk about under the cut, my whole thing being just one big spoiler. (And I also gratuitously spoil book one (A Morbid Taste for Bones).)