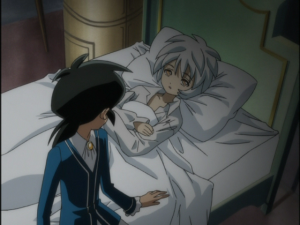 The Wispy Clairvoyant Albino Agoraphobe bears some type of strong psychic or magical power, is the key to unlocking such power, or is in some other way vitally important to those around him, but is in some way too “weak” to make independent use of this power. He or she may be physically disabled by some injury or illness; physically disabled due to imprisonment; emotionally disabled by a tendency towards passivity and a willingness to be led; or, usually, some combination of all three. He or she will be constrained to a fairly limited physical setting that nonetheless gives off an air of wealth and privilege, often a palace, temple, hospital, or laboratory.

He or she is usually, as the name suggests, very thin and pale, with white or silver hair – though blond, blue, and purple hair are also permissible if styled appropriately limpidly. (Green is uncommon.) He or she is required to be young (-looking) and attractive, and may be a small child. The Agoraphobe may be either male or female, though I’ll say “he” from here on for simplicity’s sake.

He is often a “created” being of some sort, a chimera, robot, or golem, disabled from interacting with normal human society either by some physical flaw, or by his belief (frequently imparted by the Antisocial Insomniac Genius who created him) that he is in some way utterly apart from humanity. This belief may manifest itself “positively” as a belief in his own superiority, or “negatively” as a conviction that he is a monster and revolting to human beings.

He is always in some manner constrained or led by a more physically active, “darker” character. Sometimes this character looks a lot like him, but with dark hair. When the keeper is on the side of “evil,” he or she deliberately smothers the Agoraphobe to keep him passive. If he is sick, the keeper is probably poisoning him, or at least lying to him about the extent of his disability. If he has emotional problems, the keeper fosters them. In both cases, the keeper is probably keeping him imprisoned in some way, though this is often covert, so that the Agoraphobe does not become aware until Too Late that he cannot leave the keeper’s care.

Alvis, from Last Exile. When the Agoraphobe is a small child, she tends to glow and look blank a lot. (Image stolen from here.)

The keeper is often a parent or sibling figure – the parent isolates and hurts the child due to a fear of his attaining independence, and the sibling does so out of envy of his or her brother’s power. There is often the suggestion of incest and sexual abuse. In some cases the power dynamic runs both ways, and the Agoraphobe may also exercise some emotional or sexual influence over the keeper. There must at some point be a scene in which either the keeper or the Agoraphobe is shocked to discover that he overestimated his power over the other.

Particularly in situations in which the keeper has been the bad guy, here will often be a point at which the Agoraphobe, having up until that point used his power only indirectly or at the keeper’s specific direction, will in some way enter battle. This may take the form of an assertion of independence from the keeper – with the Agoraphobe in some way disabling him or her – or that of complete loss of personality to the keeper, with whatever inhibition was keeping him from falling entirely under the keeper’s thrall being somehow destroyed.

When the “keeper” is on the side of good, his or her constraint takes the manga hero’s obsession with the ideal of “protection.” The keeper is, again, generally a sibling-figure, parent-figure, or a potential lover. If the keeper is a sibling-figure, he or she may suffer from an envy of the Agoraphobe that causes him to subconsciously strive to keep him passive and dependent.

Kaos, from Battle Angel Alita/GUNNM. Kaos has had his body taken over by his keeper Den. You can tell because he is in the rain, but is not, in fact, CRYING in the rain. Also because his typeface changed.

In some cases the keeper or someone close to him/her may express the wish that the Agoraphobe be able to become more independent, but generally this wish is set up by the narrative as a hopeless one. There is a sense of necessity and fatality about the Agoraphobe’s position. His psychic or magical powers are linked to his isolation and dependency, and there is the feeling that if he ever gained power over himself – the natural power that ordinary humans have – he would in some way lose his unnatural power.

The Agoraphobe, like the “Prince” type, tends to be associated with wealth, refinement, and purity. He will either believe himself to be innately superior to ordinary human beings, or will be told that he is, but disbelieve this due to his natural purity and humility. If the Agoraphobe is, or is to become, one of the “good guys,” he must be humbled. If not, he will discover at the last moment some fatal “flaw” in himself or his past that renders him irretrievably human, and be psychologically or physically destroyed by it.

Again like the Prince, though the Agoraphobe is considered to be beautiful, it is an ethereal, asexual beauty that is “too pure” for normal people to touch. His paleness and physical fragility are a vital part of this beauty. If he has a sibling, that sibling will generally look extremely similar to him (except with dark hair), but his or her beauty will be much less likely to be remarked upon. If someone falls in love with the Agoraphobe, one or both of them is doomed.

Hinoto, from X. A manga character with a sense of self-preservation would know not to fall in love with this woman. I mean, what the hell is that, even, her bloodthirsty demonic alternate personality? Her murderous incestuous clone-twin? Who even KNOWS, man, it could be like BOTH. Look, don’t touch. All I’m saying. (Image stolen from here.)

Probably Fit The Type, But I Either Didn’t Get Through The Whole Thing Or Can’t Remember

Avatar: The Last Airbender – Yue (I can work Avatar into anything)

Related tropes: the Prince, the Human Weapon In Search (Or Not) Of A Heart, the Antisocial Insomniac Genius, the Baby Is Always Blond, the Fucked Aryan Utopia (FAUtopia).

As before, more examples requested!

(And if someone wants to send me a scan of that page from Saiyuki where Kanzeon Bosatsu’s leaning over comatose!Nataku in a chair and going, “But I guess you can’t hear anything anymore” – or could at least tell me what volume it is – I would be very happy.)