On Tuesdays and Thursdays I have the 9:00 PM-to-midnight shifts at the library. This is obviously not ideal, but Jenan grabbed the midnight-to-2:00 AM shifts, so, you know, what are you going to do. The other person on the shift is presently a sophomore who only just got hired. Which isn’t a problem, because she’s not a crazy person or anything, but I’ve still got to answer a lot of questions and show her how to work stuff and all.

Or as they dub it, “the student brand manager“.

The Mole waited until after eleven to make its move. It struck at a moment when the senior supervisors had retreated into the back office to do computer stuff, and the junior supervisor had gone to the bathroom. It might well even have been listening in, earlier, while I was explaining cargo procedures to the new girl, marked which was the senior student worker, and decided to wait until she was too engrossed in her gigolo comic to take notice of its unseelie shenanigans.

At any rate, it was she who turned to me and said, “Oh, wow. What do you think this is?” 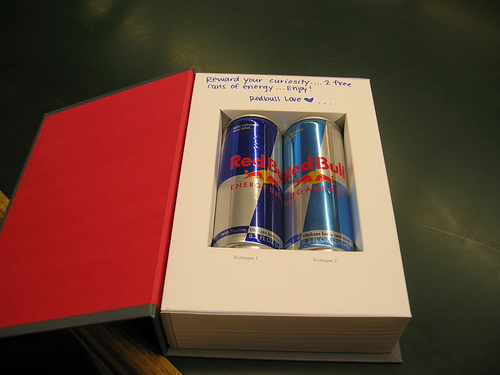 She asked me if I thought she should go find the person who’d dropped them off, since she “didn’t see anyone go outside, so they must still be in here somewhere” – but I’d remembered the fliers that had showed up around campus at the end of spring semester, soliciting applications for the exalted position of Denison University Red Bull Student Brand Manager. I assured her that this was definitely an intentional Red Bull “drop,” calculated to addict people who might be falling asleep towards the end of their shifts, and that much the same procedure was used by cocaine dealers to addict affluent suburban ten-year-olds on Halloween. Or maybe I didn’t say that second part. I then, immersed in my own fuming anti-consumer bigotry, asked what the person had looked like. She said she thought it had had been “just some girl.” My holy quest to slap a person in some way associated with the marketing of soft drinks had been thwarted… for now.

She asked if I thought we could keep them, and I told her they were all hers, but asked her to wait to dismantle it until I’d taken some pictures. And that is the tale of My Red Bull Mole Encounter On Tuesday.