MINDBLOWING picture of some kind of noodle thing: 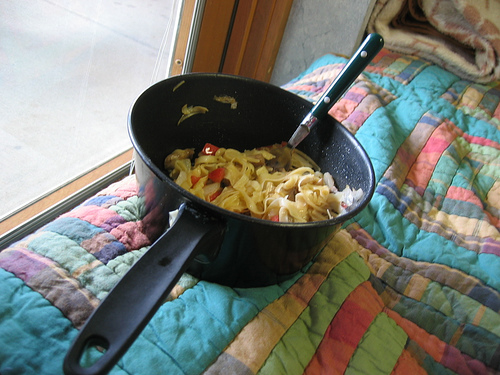 1) Take the garlic bulb apart and put half of it in a pan with some oil. Put it over medium heat, stirring sometimes.

2) Chop up the half-an-onion while that’s going on, then put it in with the garlic.

3) Wash the mushrooms and chop them up; put them in with the onion and garlic.

4) Chop up the tomato; don’t do anything with it yet.

5) Those noodles should have been cooking this whole time.

6) Move some stuff out of the way so Link can get to the microwave.

7) Once the mushrooms are all soft and brown and stuff, dump the noodles and tomatoes in with them and push everything around for maybe thirty seconds. You don’t have a frying pan, so you’ll probably burn yourself doing this. Do not be alarmed. It is an honorable wound.

8) Take it off the burner. (TURN THE BURNER OFF) It’s finished. Put some in a bowl and prepare to have your mind blown.

9) There’s too much, so put the rest in tupperware.

10) Use a lot less oil and sautee the garlic longer next time. Make a note to this extent on your LiveJournal.