While I was eating dinner, the school’s secret society (membership about five, apparently) ran in and knocked down a bunch of stuff. Being hardcore, they were all wearing nice custom-made white hoodies decorated with their attractive logo, plus the white masks. They have a KKK theme going on, but the hoods weren’t pointy, that being too last season. Though, as advertised, they *were* all husky white guys.

I wasn’t looking up when they came in, and was sitting pretty much off in the corner, but the sequence of events seemed to be, 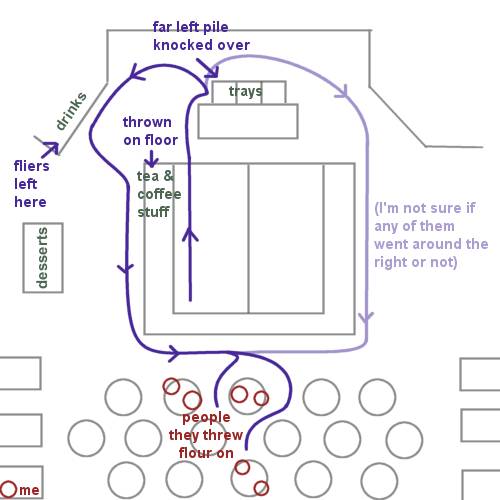 1) They rush up the stairs past the card-scan counter,

2) They knock over one of the three stacks of trays behind the counter, scaring whoever was working the scanner (just then, probably A., The Nicest Old British Lady In The World),

3) Still up front, they start throwing flour around, which they continue doing throughout,

4) They knock all the tea bags, coffee stirrers and things onto the floor, while

4a) One of them leaves a pile of fliers by the drinks (or this may have happened on the way out?), and

5) Still keeping together, they run out into the tables and throw flour on people and knock some food into the floor.

I think this all took about a minute.

Reconstructing, I think they must all have gone up the left side of the stairs – you go up the right to get your card scanned, so they would have felt better about going up the left, where they were slightly less likely to accidentally look an employee in the eye. This is corroborated by the fact that they only knocked over the farthest-left pile of trays; the trays are heavy, but not too terribly hard to knock over. I’ve nearly done it myself once, by accident.

Also, I *think* that there was only one pile of fliers, and that one they dropped by the drink fountains on the left. This is actually a pretty awful place to leave something you want to be read, because 1) the light’s very dim over there, 2) they’d already ruined the floor in front of it, and 3) it’s the *drink fountain* in a *college cafeteria*. It’s *wet.* Maybe one guy was supposed to be throwing them around, but panicked and just dropped them.

Once they were inside, they *could* have split up and gone around the central buffet on both sides, which would have looked slightly more impressive to people who watch a lot of TV, but I don’t think they did – there were definitely at least three of them working the left, I think four, and I only counted five guys total. (I could be wrong, I was sitting against the left wall.) There might have been one who went around the right by himself, but the others were basically sticking together.

While they were knocking over the tea and stuff, a couple of them could easily have trashed the dessert table, too – but that would have required stepping away from the group, and would also have taken them slightly off their route to the tables, which could have destroyed their nerve.

They went into the tables right from the center, staying pretty close in. The two tables I saw them going at the most aggressively – one near the front and on the left, and one about three rows in and dead center – were mostly female, and the person who ended up the most flour-covered seemed to be a skinny girl at the center table. Having gone that far into the crowd, they needed to find someone they felt was particularly vulnerable to mess with.

Again, the much scarier thing to do would have been to split up and go along the sides; it would give that claustrophobic effect, and it’s what bad guys do on TV when they storm the building. But they weren’t going to split up, of course.

Though if they had, this might have ended slightly differently, because I was up against the left wall, arming myself like I was apparently fucking Jamie Lee Curtis in the basement or something.

I froze for a few seconds, then started very carefully removing stuff from my tray so I could use it as a weapon – I had some trouble with the cup of orange juice, because I was watching them and not my hands, and I remember thinking that the staff was going to have e-fucking-*nough* to clean up without *me* spilling anything.

As I think we’ve all noticed by now, when I get angry, my soul becomes one with that of the ‘splosion. If anyone had gotten too close to me right then, even Random Bystander #53, I think I would have bashed them over the head with my stupid tray. I was visualizing very clearly a plan involving tangling one of the assholes in a chair and sitting on him until security came. It came complete with cuss words.

But they were already on their way out by the time I was on my feet, so I grabbed my cell phone and called security instead. Then I left because I couldn’t handle the fucking noise anymore. The stream of cuss words running through my head that didn’t dry up until I was halfway back to the dorm.

My god, I fucking hate those guys.

[…] – The Wingless Angels’ hobbies include breaking dishes in the cafeteria and releasing confused animals into crowds. Turn-ons: throwing stuff at the least-threatening-looking person they can find, preferably female. I described one of their pranks in detail in a post I made year-before-last. […]